We have great pleasure in proposing to your attention dear readers first publication of magazine “GUPPY GENETICS”, which goes about genetic and selection of splendid aquarium fish – guppy (Poecilia reticulata Peters 1859) and also others livebearing species of fish like swords, platys, mollies and so on. This publication will appear 6 times a year as a free addition to a web page genetika-guppy.my1.ru in both paper and electronic version.

Web page genetika-guppy.my1.ru and publication „GUPPY GENETICS” were created for aquarists interested in selection and genetic of guppies (Poecilia reticulata, Peters 1859) and other livebearing species of fish. Subject for web page and a publication is specific, very specialised – there is no similar positions neither in Russia nor a whole world. It is first widely available database of guppy genetic and selection.

With great pleasure we invite all aquarists interested in genetics and selection of aquarium fish to cooperation. Publish your articles, photos and other material sharing with others your experience and knowledge.

Record and increase experience in genetic and selection of aquarium fish together!

Selection of color in guppies in Russia and aboard different greatly. Western aquarists usually base their specimen choices on analyst of crossing effects between different stains and later choice of best individuals for further breedings. Russian breeders didn’t restrict themselves to choose the best looking specimens but they also based on knowledge about base body colors. Selectioners from Asia take one step further and for creating of multiplicyty of different stains they use knowledge about base body colors and many interesting genes like for example albinism. What all guppy selectioners share in common is  knowledge about genes corelated with gender and this method is till day the most popular and basic one in guppy selection.

This approach however left a lot of room for uncertainity of outcome in process of creation of new strain or trait of guppy. Selectioner could not be sure of outcome and getting the planned results took enormours amount of time – sometimes even few years.

In this publication we would like to introduce to you new concept of guppy color genetics. It has a really simple and verified by practice algorithm which when used properly gives a selectioner a powerfull tool for achieving any effect in guppy color selection – what is more important – the expected results are achieved in first or second generation. Next choosen breeder will be homozygotic for given appearance (if we have started from homozygotic breeders) and all wanted features will appear in next generations.

What is so new in this concept of guppy color genetics?

Before breeders assumed that base body color genes and surface colors define the color of guppy. New approach of base body colors without contradiction to known methods complement them with easy and new idea – autosomal genes of base body colors (“genes of pigment synthesis”) are in fact base (“working on surface”) which is defining colors in phenotype, and for genes which are decisive in markings (placed both on autosomals and sex chromosomes) on body they act as regulators.

For example if we have a dominant allele of red pigment and there is a gene (allele) of red dot on body of fish – resulting phenotype will have red dot. If any of this conditions is lacking – the red dot will not appear in phenotype. 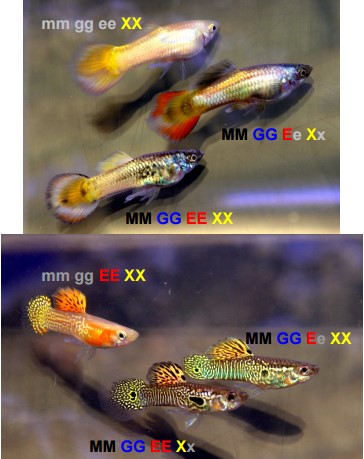 Example of genes splitting in F2 and genotypes of guppies (all these are brothers) .

Example of 16 base guppy color phenotypes (with marked genotypes):

We have to mention here so called oversurface colors: pearl (stoerzbach and micariff), neon (called also asian neon) and albino. Those traits are coded on genes which are different than base body colors and surface colors. They also inherit independly from other genes and that is why they will be described in other article.

This table (down bellow) contains corelation between number of color cells, size of color granules of pigment in those color cells and number of recessive and dominant allels of color genes in genotype.

ALLELES (?) OF BASE COLOR GENES:

Two basic rules for above:

1. Recessive alleles of every color gene reduce size of pigment graunles which are responsible for color expression of those genes and in phenotype color is absent.

Example: if genotype is: mmGGEEXX size of melanin granules in melanophores is reduced and fish is lacking black and grey colors in base body colors and in surface colors. Hue is smoked.

2. The higher number of recessive color genes alleles in genotype (ie. MmGgEeXx vs MMGGEEXX) the lower number of all pigment cells.

Ratio of dominant and recessive alleles of four genes ilustated in this way cause appearance of all possible phenotypes of base body colors as well as surface colors.

16 possible examples of phenotypes of guppy colors (with marked genotypes)

You can use this photo to decide your stock genotype and plan your further selection work.

Now for better understanding of above we will consider few examples from practic guppy selection.

The easiest example – you can have three different guppy traits – yellow tailed, red tailed and blue tailed guppies and cross them between each other. Theoretically considering only the basic genetic laws (Mendel’s laws), in second generation you can achieve all three traits renewed – it means you will have now yellow tailed, red tailed and blue tailed guppies with new blood in every trait. In practice however this hipothesis is not valid because color genes are autosomal. So 100% of fish will have traits of both parents.

In fact every color is dominant and it’s presence will show itself in all fry in autosomal variant. However colors associated with genes linked with sex chromosomes X-Y – only in a half of a fry.

Let’s consider another example. Female of blue moscow guppy crossed with male of “goździk” (red – black tail fin) gave birth to fry which in 100% had a red coloration. After a cross between F1 female with male of blue moscow strain, in F2 all fish had again red coloration. In this example we can see a coworking of not allelic autosomal genes with gens which decide surface colors.

In conclusion let’s consider one more example from practice. Anyone who has tried a cross between fish with red and blue tail fin and with grey base color knows that always and in all generations will has fish with both traits on tail fin and it will be not possible to achieve initial colors no metter how many cross between this fish one will do – it simply proves that this coloration belongs to autosomal genes. In sex linked genes however we will observe separation of colors.

It has to be remembered that homozygous specimens of exact color (for example red) will look different to heterozygous specimen with this coloration – color will has different intensity in both cases.

Using such ilustrated new concept of guppy genetic selectioner receive a powerful tool able to solve any selection problem related with color. You save time and get expected results in F1 or F2 generation.

This method could look complicated for many aquarists. This is why authors will post in every number of magazine a chapter “genetic basis”. This chapter is supposed to provide input about inheritance of traits in guppies and other livebearing species and will be useful as well for all hobbysts involved in keeping and breeding animals and plants such like cats, dogs, birds etc. Genetic is working for all living beings. You never know when this knowledge will be useful. Stay brave…

In this article we will try to shortly describe methods of selection of guppies in terms of colors.

First of all you have to know your fish genetics. Proper choosing of further breeders is not easy and that is why we have to know lineage of our fish, preferably by looking carefully at stock in breeder’s tank. Look at uniformity of few generations of fish from which you will choose: genes that are interesting to you for further selection should be homozygotous.

Next we define traits we want to achieve. For this it is necessary to read and understand publication “new understanding of guppy color genetics”. By using table from last page of this publication you can choose homozygotous breeders with traits of choosen phenotype.

In next step we choose few pairs of reproductive specimens and put males and females together. Received offspring should be raised and then crossed with each other or with one of the parents.

Next we separate fry of different variety from each other – they can have different maturation time, different growth rate. Then we choose better and needed fish for further breeding. Different traits appear in different time.

In what age we should separate offspring with first sexual dimorphism signs?

Cross between F1 female (3 on top) with male from Marlboro line (4 on bottom) resulted in “Gulf Stream” line.

The rest of article are genetics basics. Some definitions of alleles, heterozygosity, x-y linked chromosomes and so on. No need to translate it to understand basics assumptions of above theory.