My wife (Bojana) is into the guppy hobby from May, 2015
and after 15 months of breeding guppies she won in the Novice Class!
She sent 2 fish (from her line, male and female) to IFGA SHOW
hosted by Deep South Fancy Guppy Associates in August 20th & 21th, 2016
and both fish won first place in the Novice Class.

She must thank (for good advice) to Frank Schulterbrandt for second first place! lol 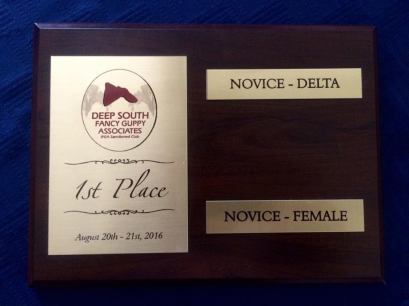 It was her second attempt ,
the first time she brought one very young male to IFGA SHOW
hosted by South Jersey Guppy Group in May 14 & 15, 2016.
Since we made the trip a little (2 days) longer than we planned to,
fish arrived at the destination in a very bad condition (split in the tail …).

This is a video of male that she sent …

We will show our guppies on occasion, we don’t attempted to win a class championship (which requires entering every show during the show season) we only want to compare our guppies to other guppies out there of exhibitors who follow the IFGA and/or WGC Standard to just see where we are with our breeding program!

Dedicated to the Fancy Guppy Hobby!
View all posts by Igor Dusanic →
This entry was posted in My Blog (by Igor D.) and tagged After 15 months of breeding guppies my wife won Novice Class, Bojana Dusanic. Bookmark the permalink.
Loading Comments...